No Minced Words & a Few Sniffles Were Detected at UX Speakeasy 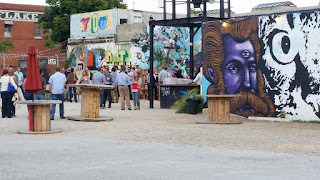 Some people were feeling emotional at last night's UX Speakeasy.  If the amazing artwork didn't get you, the starry sky would have done it for sure. It was a lovely outdoor venue at SILO in Maker's Quarter in the heart of downtown San Diego. Perfect setting for this particular event. Last night was primarily a going away celebration for Aaron Irizarry who is one of the founding members of the group.

About 3 years ago, Aaron was one of 13 women and men who decided that San Diego really needed to build community for  UX (User Experience) professionals. I've been told there was a feeling that 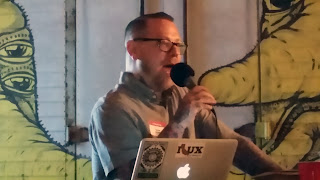 something was missing - people worked in UX in San Diego but didn't know each other, didn't hang out together, didn't realize there were quite a few jobs in UX, didn't recognize the opportunities to build a career here in UX.

Clearly they were on to something because in no time the group was maxing out space in larger and larger venues. These days we have to regularly put limits on monthly meetings in the range of 80-100 people because it's hard to find space to fit everyone interested in attending. The original group of 13 put themselves out in pursuit of a vision, and according to a tribute last night, Aaron was in the thick of all the early activities, taking leadership positions sometimes on short notice. In those days, there weren't the teams of volunteers and enthusiastic members there are today.

So when Aaron spoke about his experiences here, and said to the crowd "Be grateful you have a community of people you can connect with on a regular basis" I wasn't surprised to see some people looking almost teary eyed.

A secondary, and related reason for the meetup last night was the coincidentally timed release of Aaron's Book "Discussing Design". An overarching theme of his conversation about it was the importance of learning to have the "right" conversations. By way of example, Aaron explained how community contributed to the appearance of this book. He said that a casual conversation led to a blog post, which led to a conference proposal, which led to the book being written. Things happen when we share and explore ideas, pursue opportunities and do it with others in community.

Sometimes it wasn't clear to me when Aaron was speaking about the book or on a wider scale, but it doesn't really matter because the point is the same: it's critically important that technical professionals learn how to communicate better about our work. When people speak in buzz words or stock phrases no one knows what is really going on.

Aaron said he wanted to vomit - or something to that effect - when someone says "Can you make that pop more?".  Rather...find out: What is working, not working exactly? What is it that makes you feel it isn't going to work for our persona?

"We need to set the ground work for those conversations. We need to learn how to talk about our work. It doesn't matter how skilled you are, you'll just be another talented asshole".

Bringing the conversation back around to why all 80+ of us were there last night, Aaron wrapped up his farewell remarks by reminding everyone that they need to understand the value of this community; it's not just a monthly party. It's an opportunity for support and finding new ways to frame important conversations.