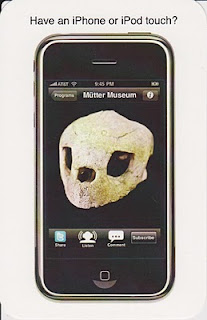 Yesterday I found out what my "surprise" here in Philadelphia was (referred to in my last post). I am here to gather information about interesting intersections of computing and medicine and so it was only fitting that on Day 1, along with my host Peter DePasquale, I visited the Mutter Museum, part of The College of Physicians of Philadelphia. To quote their literature, this incredible museum contains a vast historical collection of "unique and pathological specimens".

Not for the squeamish. Fascinating for anyone interested in the history of medicine. Row upon row, shelf upon shelf of human bones, internal organs, miscarriages, and many other preserved specimens. Some were quite unusual, such as the human colon that was 8' 4" long - pity the poor man who carried that in his body well into adulthood (he eventually died of complications tied to constipation). Or kidney stones the size of my clenched fist. At the time these stones were collected they only came out of the body one of two ways: surgery without anesthesia, or "passed" naturally. Ouch!

But for me the most interesting aspect of this museum was the information about how these specimens were used for training and research. Not all specimens were pathological. The hundreds of skulls provide a perfect example. In addition to an impressive group of deformed skulls, there was an enormous collection of "normal" skulls; in other words, either no abnormality, or only a minor problem such as a deviated septum or tooth overbite. Each skull was labeled with the name, age and gender of the person, and if available, the cause of death.

The United States in the 19th Century was much more conservative than Europe about allowing dissections, so one way that students learned was to study such collections. They would look at skull after skull after skull, in order to discern patterns and natural variations. Each skull was one example, and by itself could not teach very much. But after extensive study of hundreds or even thousands of skulls, a student would learn what was considered normal variation and be better able to discern a true pathological condition. True, a patient would present themselves in the doctor's office with a lot of stuff on top of the skull (like skin), but one worked with what one had.

Each skull was a data point and an ever growing collection of skulls became a database to mine for information. With dedicated time and experience the true pathological skull (or live human head) became much easier to identify. 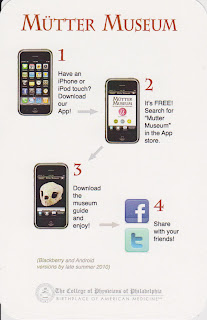 As I looked at this collection, and began observing patterns myself, it occurred to me that these 19th Century medical students were doing what we do now with the aid of computers. We do it faster and may leave much of the initial pattern matching to software, but basically the process is unchanged.

To compare a modern example to the 19th Century study of skulls, let's use the still elusive causes and origins of Autism (more formally referred to as "Autistic Spectrum Disorders", to acknowledge that all Autism is far from alike):


I now more than ever appreciate that I was not born in the 19th Century. On the other hand, 22nd Century citizens may view our medical research methods as scary to them as I considered the skulls with 6 inch holes from the practice of  Trepanning: drilling these holes to relieve, among other things, mental disorders.